Attention Cruz-Bots: “Natural Born Citizen” for Dummies is for those that think Cruz is eligible for President or Vice President of these United States you are part of the problem and not the solution! 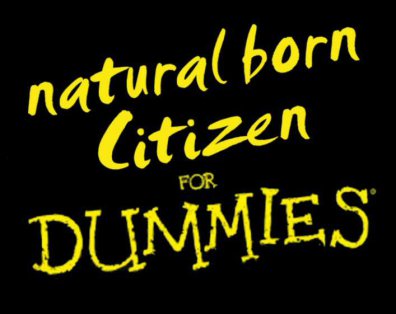 Ginsberg stated: “Mr. Kneedler, I have a problem with it [Kneedler’s argument]. You would surely have a huge statelessness problem if you didn’t recognize that the child born abroad to U.S. citizens is a U.S. citizen because, as you point out, in most countries in the world, they go by blood, not by land of birth.

You call the child born abroad an alien, but in most places in the world that child would not be a citizen of the place in which that person is born; isn’t that so?

If Congress went back to the way it was when everything was determined by the father’s citizenship, go back to before 1934, suppose Congress accepts your argument or we accept your argument and say plenary power, they can do whatever they damn please, so they say children born abroad of fathers who are U.S. citizens can become U.S. citizens, but not children who are born abroad of U.S. mothers where the father in an alien. “That’s the way it used to be in the bad old days.”

The case involved a child born in Vietnam to a Vietnamese mother and an American
father who were not married. At age 6 the boy moved to the United States with his
businessman father. At age 22 he was convicted of sexual assault and the INS began
proceedings to have him deported.

Ngyuen considered himself Vietnamese, but his father considered him to be a U.S citizen. The lawsuit involved the fact that the INS has different rules for such a situation, depending on whether the mother or the father is the U.S.citizen.

In a 5–4 decision the Supreme Court ruled that the INS did not violate the Due Process
Clause of the Fifth Amendment to the U.S. Constitution. Ginsberg voted with the
minority. The significance of the case is that Ginsberg understands legal precedent with
regard to citizenship and parentage, and is aware of the concept of “natural law” that
Historically considered the bloodline of the father to be critical in ascribing citizenship.

Ginsberg understands that a child born in Vietnam to a Vietnamese mother and an
American father is considered a U.S. citizen. That prompts the question: Might she
similarly someday rule that a child born in the United States to an American mother and a
father who is a citizen of the British Protectorate of Kenya is considered a British/Kenyan
citizen?

If Obama cannot even depend on a liberal member of the Court to rule in his favor, there
is little wonder why he is fighting eligibility lawsuits so fiercely. He is not stupid. He
knows he is not a natural born citizen, but became president because he correctly
estimated that few people understand the term and knew the media would not pursue the
issue.

Most Americans do not understand the meanings of the different terms. “Native born” relates to place of birth, while “natural born” relates to parentage and the “laws of nature” the family lineage of the father’s bloodline. That is the history of the terms, both in general and legal usage. Obama supporters can scream and shout all day long, “He was born in Hawaii!” but, true or not, that is irrelevant.

Emerich de Vattel’s The Law of Nations (1758) was widely read by and influenced the
Founding Fathers of the United States. He wrote, “natural-born citizens, are those born
in the country, of “parents” who are citizens. As the society cannot exist and perpetuate
itself otherwise than by the children of the citizens, those children naturally follow the condition of their fathers, and succeed to all their rights.

The society is supposed to desire this, in consequence of what it owes to its own preservation; and it is presumed, as matter of course, that each citizen, on entering into society, reserves to his children the right of becoming members of it. The country of the fathers is therefore that of the children; and these become true citizens merely by their tacit consent.

I say, that, in order to be of the country, it is necessary that a person be born of a father who is a citizen; for, if he is born there of a foreigner, it will be only the place of his birth, and not his country.”

In other words, because Obama’s father was not a citizen of the United States, Obama is
not a natural born citizen; he is only a native born citizen (assuming he was born in
Hawaii).

As the decades passed, of course, natural born citizens attained the age of 35 and the
additional language became superfluous. Abraham Lincoln, for example, was at least age
35 when he ran for president and was a natural born citizen by virtue of having been born
on U.S. soil to two citizen parents.

The exception served a purpose in 1787, but everyone who was covered by that exception is now dead. Those who argue that it is sufficient to have been born on U.S. soil to be considered a natural born citizen do not understand the history of the term.

They should be required to explain why the Constitution needed to include that presidential eligibility exception, “or a citizen of the United States, at the time of the adoption of this Constitution.

” If natural born citizen means nothing more than having been born on U.S. soil, that language was not necessary. That it was included is further proof that the drafters meant for the term natural born citizen to mean what it had meant historically, in both British law, The Law of Nations, and other writings.

They did not write that a president need be only a “citizen,” or even a “native born citizen;” they wrote that the president must be a “natural born citizen.” (As Obama is wont to say, “Words have meanings.” So do those in the U.S. Constitution.)

Should the U.S. Supreme Court ever be asked to rule on the meaning of natural born
citizen and how it applies to presidential eligibility under Article II, Section 1 of the U.S.
Constitution, the Justices tempted or pressured as they might be cannot ignore history,
precedent, and centuries of law.

Again, Vattel wrote in The Law of Nations, “I say, that, in order to be of the country, it is necessary that a person be born of a father who is a citizen; for, if he is born there of a foreigner, it will be only the place of his birth, and not his country.”

What many Americans believe to be the meaning of natural born citizen “Born in the USA” is actually only the meaning of native born. If the Supreme Court rules according to the law, it would have no choice but to rule that Obama does not meet the eligibility requirements of the presidency.

He is not a natural born citizen of the United States—regardless of where he was born—because he did not have two U.S. citizen parents and, historically, the father’s citizenship is conveyed to the child.

For that same reason, Louisiana Governor Bobby Jindal and United States Senator from Florida Marco Rubio cannot be president. At the time of their births their parents were not both U.S. citizens. The fact that most Americans, most politicians, and virtually everyone in the mainstream media does not understand the law is irrelevant.

The Supreme Court can only rule on the basis of law and legal precedent,
not the uninformed preferences of the citizenry. ~ Don Fredrick May 6, 2010

The Cruz Timeline
For those who think Article II, Section I, paragraph V Natural Born citizen (NBC), is outdated and a toy for the Harvard lawyers and US Supreme Court to interpret depending on their politics and who appointed them you are wrong.

Art.II, NBC may in fact be the glue that holds the Constitution together. If you don’t believe that, just look what our illegal, ineligible and un-Constitutional President Barack Obama has done already to destroy whole sections of the Constitution in 6 short years.

Those who think that electing another illegal, ineligible and un-Constitutional person to President just because he says what you want to hear when he speaks, you are fools.

Ted Cruz may well be the man he says he is, even so his election will destroy the Constitutional eligibility of Article II and sooner or later lead to another Barack Obama or someone even worse.

How does George Soros sound to you? If you allow something to be possible, it will happen. Just allowing Ted Cruz to be a candidate is destroying Art. II NBC. He must be exposed for the traitor that he is. Fool me once shame on you, fool me twice shame on me. ~ Luke P. Patrino U.S. Conservative Action Coalition.

Sources:
Citizens and natives. The natives, or natural-born citizens, are those born in the country, of “parent’s” who are citizens. As the society cannot exist and perpetuate itself otherwise than by the children of the citizens, those children naturally follow the condition of their fathers, not their mothers bloodline and succeed to all their rights.
http://www.constitution.org/vattel/vattel_01.htm

What Our Framers Knew By Publius Huldah. No Person except a natural born Citizen, or a Citizen of the United States, at the time of the Adoption of this Constitution, shall be eligible to the Office of President.. U.S. Constitution Article II Section 1
http://tennesseewatchman.com/2015/08/25/the-constitution-vattel-and-natural-born-citizen-what-our-framers-knew-by-publius-huldah/

Rather, the Court explained that it is only through the grace of a naturalization Act of Congress that such a person is accepted as a “citizen” of the United States and that Congress has the power to impose conditions for the acquisition and retention of that citizenship, and even the power to deny such citizenship all together.

A person subject to Congress’s power to grant or withhold citizenship is not a natural born citizen under the Constitution which denies Congress such power and gives it only the power to naturalize.

Being born in Canada to a U.S. citizen mother and a non-U.S. citizen father, Cruz cannot satisfy that presidential eligibility definition which still existing under the Constitution today.

He is therefore not a natural born citizen and not eligible to be President. These facts also apply to Jindal and Rubio.
http://www.birtherreport.com/2015/03/flash-point-attorney-slays-western-free.html

U.S. Constitution Article II, Section 1, “natural born Citizen” presidential eligibility clause
Senator Cruz, Senator Rubio, and Governor Jindal Should Not Be Allowed to Participate in the Presidential Debates Because They, Like De Facto President Obama, Are All Not Natural Born Citizens and Therefore Not Eligible to Be President.
http://puzo1.blogspot.com/2015/05/senator-cruz-senator-rubio-and-governor.html

Cut and Dry the Founders who wrote the Constitution made the “Grandfather Clause” for them “ONLY.” The Founders made this possible with this portion of Article II—Section I—Clause V; – “or a Citizen of the United States, at the time of the Adoption of this Constitution;”

They included a grandfather section in the clause pertaining to constitutional qualifications for the office of President, – A ONE-TIME exemption from the “natural born citizen” requirement for president.
http://patriotsforamerica.ning.com/forum/topics/were-any-of-the-founding

Offers case law from the period proving that it was the father, and only the father (or in his absence other male relatives) who mattered when it came to determining citizenship. ~ Law Scholar Jean-Marc Lofficier
http://www.birtherreport.com/2015/05/fantastic-congressional-research.html