The “new attack ad” released for TV viewers attacking his opponent for a 2002 state House vote that imposed a new per-bed fee on nursing homes will only work for the die hard “sheeple” Republican voters who would cast a vote for Satan if he had an (R) after his name! 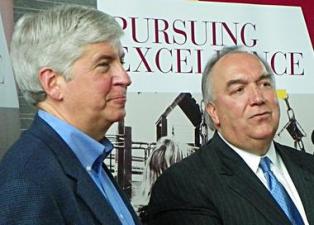 The problem is, The “Medicaid Quality Assurance Assessment Program” was backed by Republican Gov. John Engler (R) in 2002, which was supported by a majority of Republicans in the state Legislature and was later extended by Gov. Rick Snyder (R) in 2011.

The program was designed to win federal match dollars and then return them to nursing homes that participate in Michigan’s Medicaid program.

“By continuing the assessment, the state receives more in federal matching Medicaid funds than what is paid out by nursing homes,” according to a 2011 press release from Snyder’s office.

“These funds are then directed back to the nursing homes in Michigan that provide SnyderCaid services.”

Several so-called Michigan Republicans also voted in favor of the nursing home assessment program (bed tax) in 2002 while serving as State Representatives by casting their “yes” vote. They are included in the photo above with Snyder they are current State Senate Majority leader Randy Richardville along with two other current State Senators Mike Kowall and John Pappageorge.
http://www.mlive.com/lansing-news/index.ssf/2014/04/fees_on_nursing_home_beds_repu.html

2002 Senate Bill 1323: Michigan Medicaid Quality Assurance Assessment “bed tax”
Public Act 562 of 2002 Signed by Governor John Engler (R) on October 1, 2002
Introduced by Sen. Loren Bennett (R) impose a new “bed tax” on nursing homes, hospitals, and HMOs, which is designed to allow the state to garner a greater amount of federal Medicaid dollars. These would be returned to the health providers, resulting in a net gain for most of them.
http://www.michiganvotes.org/2002-SB-1323

Watch the Snyder supported TV commercial on nursing bed fees
Talk about calling the kettle black here folks I mean, look at that crazy uninformed liberal saying taxing the elderly and infirm just so they can have a place to lay their heads at night!

Can you imagine the kind of person who would support such a thing? The Republican majority passed this not once but twice under two different Republican governors. Hmmm…
http://www.youtube.com/watch?v=PjSoF2_pPZs#t=20

2011 House Bill 4734: Eliminate sunset on MMQAA health care provider tax
Public Act 144 of 2011 Signed by Gov. Rick Snyder on September 20, 2011
Introduced by Rep. Matt Lori (R) on August 24, 2011, to extend an Oct. 1, 2011 sunset on the “Michigan Medicaid Quality Assurance Assessment” (MMQAA) tax on health care facilities until Oct. 1, 2015. This is a bed tax or fee on health care providers that is used to generate more federal Medicaid matching funds, resulting in a net gain for some but not all of the providers.
http://www.michiganvotes.org/2011-HB-4734

Note: All Republicans in both the House and Senate voted in favor of this 2011 House Bill 4185 with the exception of Senator Joe Hune.