Well it’s election season and the propaganda is in full force. Governor Rick Snyder is trying to redefine not only himself as the “Comeback Kid” reinventing Michigan calling it the comeback state, but the very term common sense. It is critical to the future of our state that voters not fall for either attempt.

It has been pointed out by others and is still worth repeating: Working Michigan families have not experienced a comeback, and therefore the moniker “Comeback Kid” is laughable. The narrative of Snyder’s re-election ad rings decidedly flat for those still experiencing unemployment and under employment in Michigan.
http://www.detroitnews.com/article/20140219/OPINION01/302190004/Comeback-talk-defies-common-sense 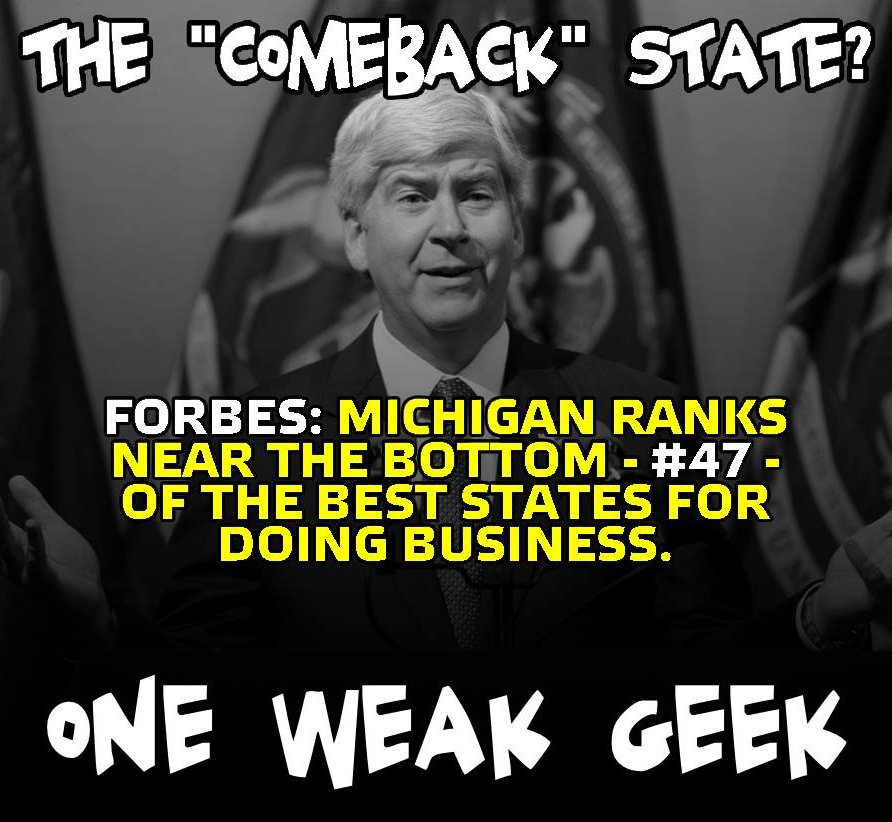 Our state has the fourth highest unemployment in the nation, and almost 400,000 out-of-work “Michiganians” are still waiting for the governor to create “more and better” jobs. Michigan ranks near the bottom, 47th in the nation for not just unemployment but as one of the worst states for doing business.

High taxation, over regulation and crony capitalism is but a few of the issues keeping Michigan at the bottom in both of these categories.

Michigan ranks near bottom of Forbes’ Best States for doing Business
Forbes’ annual Best States for Business list as of year ending 2013 ranked Michigan at No. 47 of the 50 states.
http://www.crainsdetroit.com/article/20130925/NEWS/130929908/michigan-ranks-near-bottom-of-forbes-best-states-for-business-list#

Virginia ranked first and is also one of  the 24 right-to-work states that now includes Michigan. Areas that hurt Michigan’s rating included business cost (the state ranked no. 38), labor supply (no. 48), economic climate (no. 47) and growth prospects (no. 47).
http://www.forbes.com/sites/kurtbadenhausen/2013/09/25/virginia-tops-2013-list-of-the-best-states-for-business/

Business cost is based off Moody’s Analytics cost of doing business, which includes labor, energy and taxes. Labor supply measures educational attainment based off Census data and also considers migration and population projections.

When our Republican controlled legislature is more concerned with the “Friends and Family” programs and the “Business Buddy Fund” along with legislation benefiting themselves and un-related to creating an environment conducive to job creation, “Houston We Citizens of Michigan Have a Huge Problem!”

Concentrating on such legislation as “A Mortgage Bill for the MIGOP Chairman’s Brother” and passing laws regulating “Pigeon’s” along with wasting taxpayer money and time on a legislative “Polar Plunge” during session is unconscionable.

But it just doesn’t end there. The state of Michigan continues to harass private small business owners such as Mark Baker and his “pig” farm. I guess Mr. Baker doesn’t donate to the campaign coffer’s of our elected official’s or have the clout that the Michigan Pork Producers Association does who pay through donations for access and favorable legislation from our legislators?

Michigan Judge Ruling: Mark Baker Can Raise His “Feral” Pigs, But What About Everyone Else?
The state of Michigan wasn’t seeking any longer to bar Baker from raising his pigs, and wasn’t seeking to impose the $700,000 fine it levied last year. But the damage to the Baker family was already done emotionally and financially.
http://thecompletepatient.com/article/2014/february/27/mi-judge-ruling-mark-baker-can-raise-his-%E2%80%9Cferal%E2%80%9D-pigs-what-about-everyone

2013 Senate Bill 631: Revise carrier pigeon licensure mandate (Senate Roll Call 53)
Passed 34 to 0 in the Senate on February 26, 2014.
To prohibit a person from getting a state-mandated carrier pigeon license if his or her facilities do not meet regulations imposed by the local government, but preempt locals from banning carrier pigeons outright.
http://michiganvotes.org/RollCall.aspx?ID=685602

Khan celebrated the passage by taking the podium Tuesday while wearing a black eye patch and saying, “It’s time, and now recognized, that the state of Michigan acknowledges this holiday and grants it the recognition it truly deserves.”

Kahn pointed out that Michigan is the Great Lakes state and should support and promote “worthy maritime initiatives.”
http://michiganvotes.org/Legislation.aspx?ID=160886