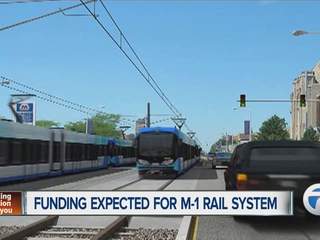 Our current Republican Governor and his counterparts within the Republican controlled legislature in Lansing has proven the exact opposite of the stated stand above they do not adhere to that ideology. Higher taxation, more regulation and bigger government involvement and intervention in business and the economy at the cost to taxpayers has further proven they are on the wrong track for Michigan’s taxpaying citizens and the Republican Party’s stated mission.

In January 2013, with a $25 million (taxpayer funded) U.S.. Department of Transportation grant under the guise of economic development and the proposed 45 permanent positions for Detroit Department of Transportation workers this project has moved forward. With all the “secrecy” surrounding the Michigan Economic Development Authority (MEDC) and their non-transparency no telling how much other taxpayer funds will be funneled to this project!

We taxpayers have been to this dance before. One look at the projections made when the Detroit People Mover was proposed should send up huge “red flags” to the taxpayers of Michigan. The M-1 Rail Line will eventually be donated to the Regional Transit Authority, officials said. Governor Snyder’s 2014 executive supplemental budget calls $2 million “taxpayer dollars” from the general fund to be allocated to the Regional Transit Authority. How much more of Michigan taxpayers’ dollars will be wasted only time will tell. The M-1 Rail Line is expected to serve 6,000 riders a day initially and eventually grow to 10,000. See People Mover.

The Detroit People Mover opened in 1987 at the time of planning; the system was projected to have a ridership of 67,700 daily. In it’s first year, an average of 11,000 riders used the People Mover each day. The Mover costs $12 million annually in city and “state subsidies” to run. So, all Michigan taxpayers who never have or never will use this system pays for the few who do use it. In 2006, the Mover filled less than 10 percent of its seats! The daily ridership 7,083 – Annual ridership 2,328,084 (FY 2011).

Michigan Senate OKs bill “shifting” $100M for snow removal and RTA
The “Theft” of our road tax money continues!
The legislation would mean at least $10.83 million for the four counties in the Detroit region, including $2.44 million for Macomb County, $3.74 million for Wayne County and $3.86 million for Oakland County, according to the Michigan Department of Transportation.
http://www.detroitnews.com/article/20140220/POLITICS02/302200077/1361/Michigan-Senate-committee-OKs-shifting-$100M-for-snow-removal

The supplemental budget includes: nearly $20 million for Harper and Hutzel hospitals, and $2 million in start-up costs for the Regional Transit Authority of Southeast Michigan among other carve out’s to other entity’s.

Sen. Roger Kahn, R-Saginaw Township, said passage was crucial for many departments in the state. If our legislators in Lansing would just wake up and open their eye’s they would clearly see that by abolishing the “failed” quasi government entity the business buddy favorite MEDC that would supply the much needed funds that these state departments so desperately need. But if they did that they wouldn’t receive the “kick-backs or campaign coffer enrichments now would they!
http://www.freep.com/article/20140220/NEWS06/302200081/michigan-roads-potholes-repairs-proposal

The authority has $500,000 taxpayer funded capital in the bank to work with, provided through the Michigan Department of Transportation. Sen. Roger Kahn, R-Saginaw Twp., whose chairman of the Senate Appropriations committee, said a discussion planned for Thursday on a supplemental appropriations bill between him, House Appropriations Chairman Joe Haverman, a Holland Republican, and state Budget Director John Nixon would likely include additional RTA taxpayer funding.
http://www.theoaklandpress.com/general-news/20131119/regional-transit-authority-ceo-has-yet-to-sign-contract-cites-lack-of-dedicated-funding-stream

Michigan House approves regional transit authority
Senate Bill 911, which allows for the collection of new vehicle registration fees to fund the RTA, also passed through the House by a vote of 57-50. Earlier on Thursday, the House had taken action only to pass SB 909, the RTA enabling legislation.
http://www.annarbor.com/news/michigan-house-approves-regional-transit-authority-including-washtenaw-county-in-57-50-vote/

2012 Senate Bill 909: Create Detroit regional mass transit authority
Public Act 387 of 2012
Introduced by Sen. Tom Casperson (R) on January 26, 2012, to create a new Detroit area regional transportation authority (previously called DARTA now called RTA Southeast Michigan Regional Transit Authority) covering Macomb, Oakland, and Wayne counties, and potentially others. Among other powers the authority could levy property taxes (special assessments) and higher local vehicle registration taxes with the approval of a majority of the aggregate of all votes cast in an election (meaning a particular community could not “opt out” of the tax increase).
http://www.michiganvotes.org/2012-SB-909

Comment on Bill – Re: 2012 Senate Bill 909  by waltduro on March 30, 2012
Here Snyder goes again, looking to raise taxes so his buddies at Business Leaders for Michigan can get paid.

Senate Bill 911, Authorize Detroit regional transit vehicle registration tax
Introduced by Sen. Bert Johnson (D) on January 26, 2012, to give the regional transit authority proposed by Senate Bill 909 the power to impose a higher vehicle registration tax in the region to pay for buses and other public transportation.
Public Act 388 of 2012
http://michiganvotes.org/Legislation.aspx?ID=144494

Business Leaders for Michigan – Members: Many of these listed members have received taxpayer funded subsidies for their individual business ventures here in Michigan. http://www.businessleadersformichigan.com/blm-members/

Senate Majority Leader Randy Richardville, R-Monroe said Legislation has been introduced to add sexual orientation protection to the Elliott Larsen Act, repeal the state’s ban on same-sex marriage and allow for the state and businesses to provide benefits to same-sex and unmarried partners.

So what Mr. Richardville is essentially saying is that the legislature will pass a law as to sidestep the will of the citizens of Michigan’s who voted in favor of an amendment to the Michigan Constitution that states marriage is a union of one man and one woman. Read more scroll down below picture.

Michigan Proposal 04-2 of 2004, is an amendment to the Michigan Constitution that makes it unconstitutional for the state to recognize or perform same-sex marriages or civil unions. The referendum was approved by 59% of the voters.

The text of the amendment states: To secure and preserve the benefits of marriage for our society and for future generations of children, the union of one man and one woman in marriage shall be the only agreement recognized as a marriage or similar union for any purpose.

In May 2008, the Michigan Supreme Court held that the amendment bans not only same-sex marriage and civil unions, but also public employee domestic partnership benefits such as health insurance. The ruling however had little effect since most public employers, relaxed their eligibility criteria to not run afoul of the amendment.

For our elected officials in Lansing to usurp by legislative action the will of the people is unconscionable! The Republican controlled legislature in Lansing continues to pass laws as to make their illegal activity legal with a complete and total disregard of the people of Michigan.