All of the Cruz supporters say he is ant-establishment and will fight the establishment and return our government to limited government, conservative and principled values. This will be one heck of a trick if one bothers to do the research and connect the dots.

Let’s take a close look at the credentials of this “ineligible” so-called anti-establishment fraud of a candidate shall we. Let’s also put aside the eligibility issue for now and see just who Ted Cruz really is. Also let’s put aside his connections to the Big Wall Street Bankers and his off-shore tax free accounts in the Caribbean as well.

Connecting the Political Establishment Dots and some of the Players

MITeaPartyNews: Aug 2014 Senator Ted Cruz took a tour through Michigan with “establishment” power broker Ronald Weiser. Check out this endorsement. In Michigan many of the Tea Parties have been high-jacked and co-opted by the establishment MIGOP. Article continues below audio picture.

Eileen and Ron Weiser
Who is Ron Weiser? He is wealthy, politically well connected establishment power broker and has been a dedicated member and “crony” friend of the Republican Party for many years as to advance his personal and Party over people agenda.

Many Republicans in Michigan believe he has “earned the right” to this position as a reward and recognition for all he has done for the Republican Party.
http://stopcommoncoreinmichigan.com/2014/08/ron-weiser/

Eileen Weiser testified before the Michigan Senate on The Common Core Standards asking Senate lawmakers to restore funding for the standards quickly!
http://www.mlive.com/education/index.ssf/2013/10/michigan_senate_hearing_on_com.html

Ron Weiser was the chairman of the Michigan Republican Party elected to that office in February 2009.  Prior to his election as the MIGOP chairman he was anointed the MIGOP Finance Chair under then chairman Saul Anuzis a strong supporter and advocate of the National Popular Vote initiative.

Ron Weiser, whose prolific fundraising had “earned” him the US ambassadorship to Slovakia under George W. Bush, Weiser got his start in politics in 1989 when then-Senate Majority Leader John Engler asked for his help in his first run for governor. John Engler created the “failed” MEDC where he appointed a little know political crony Rick Snyder as chairman of this new government entity.

Weiser is also well-known in national GOP circles, having been appointed as a national co-chairman for  GOP presidential candidate John McCain’s 2007-08 campaign. Other anointed accolades that earned Ron Weiser prominence within the GOP establishment “club” he was awarded a finance chairmanship of the RNC by Republican National Committee (RNC) Chairman Reince Priebus.

Sure looks like the same “establishment” players are playing musical chairs with their positions in the MIGOP doesn’t it?
https://www.gop.com/rnc-chairman-reince-priebus-appoints-ambassador-ron-weiser-as-national-finance-chairman/?

Race for Michigan GOP chairman down to Ron Weiser
http://www.crainsdetroit.com/article/20090127/FREE/901279978/race-for-michigan-gop-chairman-down-to-ron-weiser 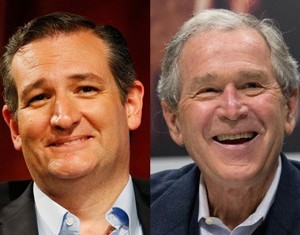 Long before Ted Cruz was a big-name senator wowing the religious crowd at Liberty University in the early days of his presidential bid, he was just another lawyer toiling away in virtual anonymity under George W. Bush.
http://www.nationalreview.com/article/416074/ted-cruz-bush-years-jim-geraghty

George W. Bush is ‘the person most responsible’ for Ted Cruz’s political success
Oh how Party loyalty changes.” I just don’t like the guy,” said George W. Bush of Cruz in Denver suggesting that Cruz had “hijacked” the Texas GOP.

This rift is again drawing attention to one of the central themes in Cruz’s political universe and his years working for and “enthusiastically” supporting the same Bushes. Cruz was a part of George W. Bush’s 2000 presidential campaign, then a member of his administration in roles at the Justice Department and the Federal Trade Commission.

“Few, if any, in American politics have more of an “establishment resume” than Sen. Cruz,” said Stuart Stevens, the top strategist for Mitt Romney’s 2012 presidential campaign.

BuzzFeed published excerpts of a little-known contribution Cruz made to a 2004 book called “Thank You, President Bush.” In a 16-page chapter, Cruz effusively praised George W. Bush on a range of issues, sometimes “in direct contradiction with his more recent criticism of the Bush administration,” can you say “flip-flopper” Romney style!
http://www.rawstory.com/2015/10/george-w-bush-is-the-person-most-responsible-for-ted-cruzs-political-success/

If you want to know what’s really going on in the political arena read what the “left” is saying that the “right” doesn’t want you to know. Reading only what the “right” spoon feeds will keep you dumb downed within the Party where they want you. Yeah Party “unity” that ought to do it. Oh my…
http://www.motherjones.com/politics/2014/01/devos-michigan-labor-politics-gop